Why I Left MoneyDance for Quicken 2019

For nine years I've used MoneyDance from Infinite Kind.  But as of today, after hearing Dave Hamilton rave about Quicken 2019, I'm happily back in the Intuit camp.

Way back in 2005 I purchased Quicken Mac OS to replace Dollars and Sense, which I had used since 1991. All was good.

Then in late 2010, Intuit decided to abandon Mac OS and not support Lion (OS X 10.7) just as the rest of the tech world was embracing it, and Apple had become the largest tech company on earth.  What were they thinking in Mountain View?

Mac users scrambled to find replacement finance software.  Enter MoneyDance.  For $49.95 you could import your Quicken data as a QIF, link it to your bank, and with a bit of a learning curve continue on.

MoneyDance had some features Quicken lacked or did poorly. The interface looked a bit less polished.  But overall, it was a life boat given that Intuit decided to abandon Mac OS Quicken just as Apple was ascending.

But then MoneyDance broke!
The result was losing most of my 2013 and 2014 transactions due to some sort of software glitch.  MD overwrote the backup files and I didn't discover this until some time in 2015 when I was reviewing previous transactions for tax purposes.

My data was just gone!  No error messages.  It trashed all but two payees in those two years.

Needless to say that's not what you want in your financial software.  Quicken had yet to prove itself after it's return to the Mac, and reviews were negative.  So I plowed on with MoneyDance, until today.

Today, listening to Mac Geek Gab 774, Dave Hamilton raved about the 2019 Mac Version of Quicken.  So, I downloaded the basic version, imported a QIF from MoneyDance.  He is right!

It is like moving from VHS tapes to HD in terms of being a fully modern system.

For starters, you don't have to manually download transactions from your institutions.  Quicken has an automatic download feature that keeps it all in sync!

And when I first went to my bank, Quicken saw that I had several accounts and asked if I also wanted to add those and automatically download transactions.  You bet!

It updates automatically.  But, if you want to make double sure you're up to the second with all your accounts, you just click a Sync icon in the upper left corner.  No log in needed.  In seconds all your accounts are synced from the cloud and balances accurate. 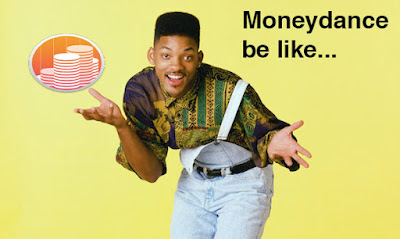 Contrast that to MoneyDance which has had a very spotty record these nine years of being able to make a connection to my financial institutions.  Often it was out of date security certificates or just "unexpected errors."  At one point I waited 4 months for IK to create a patch.  And I had to hunt on their web site for it, versus an automatic update as in Quicken.  That is so, 1995.

Goodbye MoneyDance.  You were a port in a storm back in 2011.  But the world has long, long passed you by.

Follow Up 6 months later....Still so glad I switched back to Quicken.