I installed the Ring Video Doorbell Pro about two months ago. 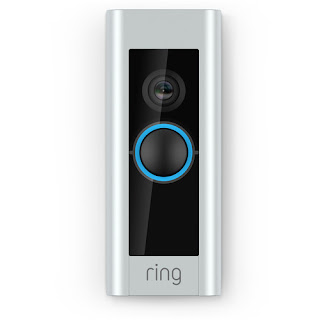 Power Hungry!
I measured 18.5 to 19 volts at the doorbell and installed the tiny Ring PowerKit v1 just for good measure on my existing chime to make sure it had enough juice.

For the first few days, despite following all the support tips and videos, I got nothing.  No white LED light, no WiFi signal.  Nothing. Yet the wires still tested 18.5 volts at the door.

I read on Ring's support site and online about how many people's Ring doorbell suddenly "woke up" after a day or three, and began to work.

But after 6 days mine was still dead despite steady power to it.

On the Seventh Day....
Then, suddenly, on the 7th day behold, the light came on and the Device Health on the App said it was, "Good."  So I connected the Ring to the network, and the device health said it was, "Very good," for five days.  Then it died again.

Failing "Health"
And this cycle repeated several times over the next weeks.  The Device Health on the App would start with a "very good"  4,000+ millivolts.  But then it would slowly drop over the next couple days until it quit working.

A Fluxing Capacitor
I found online that there is an undocumented capacitor inside the Ring doorbell that must "charge" before the device will work.  (A capacitor stores power, like a rechargeable battery.)  But at that time, nothing on the Ring site mentioned it.  Now they've added a note:


"For Ring Pro to function correctly, the voltage needs to be at least 3,900mV.
Note: The Voltage reading in Device Health corresponds to the level of CHARGE."

It's a Drain on the System.
They say Night Vision can drain it.  Or I assume any other functions such as recording motion.

Do I need a bypass, Doc?
First I tried a chat with a Ring support person to order the free bypass cable or the brand new PowerKit v2, which has the bypass option.  But when I asked the chat person, "Don't you need my address to ship it to me, she wrote, "No, I'll send you an email form to fill out."  The form email never came, although a Ring customer survey did.

Finally I voice called Ring and got great help.  The rep said, "Huh, there is no emailed form to fill out!"  So he got my address and the PowerKit v2 arrived a few days later.  But it did not help at all.  The same charge and drain cycle continued.

I Need More Power
More Google searching confirmed that the Ring Pro really needs A LOT more power than the stated minimum of 16V.  Perhaps yours is working, but many don't, or it's spotty.  The quickest, cheapest, best solution is just to purchase a 24 volt AC power adapter.  You can even buy the plug in type that look like a wall wart adapter.  Don't even bother with lowly 16 or 20VAC transformers.  There is no significant cost savings.

The Elk's Club - Just $19.95
I recommend the Elk TRG2440 24VAC, 40 VA AC transformer.  I bought it on Amazon for $19.95.  Presto, like Marty McFly once they kiss....it sprang back to life.  And I was quite ready for this rockin' Ring Pro to work!  The device health on the Ring app soared to over 4000 instantly and has never dropped (unlike Ring stock prices).  You can get hardwired power transformers too, if you don't have an outlet.  (Hire an electrician if that's the case, or better, have him install an outlet for about the same cost.)

In the Creepy Crawl Space
Your doorbell power supply is usually located in your attic, a closet near the door, or....the dreaded crawl space under your house if you have one.  Yes, mine was keeping the spiders and other critters company in the crawl space.  But I just unhooked the two wires from the 16VAC/10AV power supply that had originally powered my doorbell, then plugged in my new Elk 24 to a socket nearby and connected it.  Bingo!

Doorbell Power is Like No Power On Earth
The wimpy  power supplies that come with a standard doorbell chime are not up to powering a WiFi device with an HD camera in most cases.  16VAC with just 10 volt amps doesn't cut it.  Ring's power booster PowerKit might do it for you, but just barely.  Or not at all, like my case.  It's not just the voltage.  Those 10 volt amps just don't allow enough power to be sent.

What's a Volt Amp?
OK, for the most part a volt amp is just like a regular amp.  But an AC transformer converts power in waves.  Sometimes the peak of the voltage wave does not line up with the peak of the current wave.  But when they do, Great Scott, it's a beautiful thing:  just like 40 amps!  That extra headroom means your transformer will deliver all the power needed, even when they don't align.