You would think that Florida's Stand Your Ground provision in the law was some wacked out thing.  But here is it below.  Take a second to read it.  I'll wait.


A person who is not engaged in an unlawful activity and who is attacked in any other place where he or she has a right to be has no duty to retreat and has the right to stand his or her ground and meet force with force, including deadly force IF he or she reasonably believes it is necessary to do so to prevent death or great bodily harm to himself or herself or another or to prevent the commission of a forcible felony.

This is straight forward common sense.

It basically says if you are somewhere where you have a right to be, not breaking the law, and someone attacks you AND you believe your only option to escape death or great bodily harm is to return force with force, then you have the right to do so. That is, if your perception is that trying to retreat would jeopardize you or someone else, then you may instead use force to defend your self without retreating.

Do you not want that right? Imagine you're sitting somewhere in public. Suddenly someone attacks you violently and you grab a stick and hit them back because you are afraid for your life. Without stand your ground YOU would be guilty of assault because you didn't first try to run like a pansy, exposing your back. That's all stand your ground is.

Does stand your ground even apply to Geroge Zimmerman's case? It's questionable.  Zimmerman was pinned down when he was being severely beaten.  An eye witness confirms that.  He could not retreat.  It wasn't an option.   Once attacked with deadly force, the head pounding, Zimmerman had no chance to run, therefore stand your ground does not even apply.  Plain old self-defense applies.

The attack on Zimmerman was, by his account, in two stages.  First, was an initial blow to the nose.  Had Zimmerman shot at that point then his only hope would be "stand your ground."  But the second stage of the attack was for Zimmerman to be pinned down and having his head pounded on the concrete, as the eyewitness confirms.  At this point stand your ground was irrelevant.

George Zimmerman after his encounter with Treyvon Martin 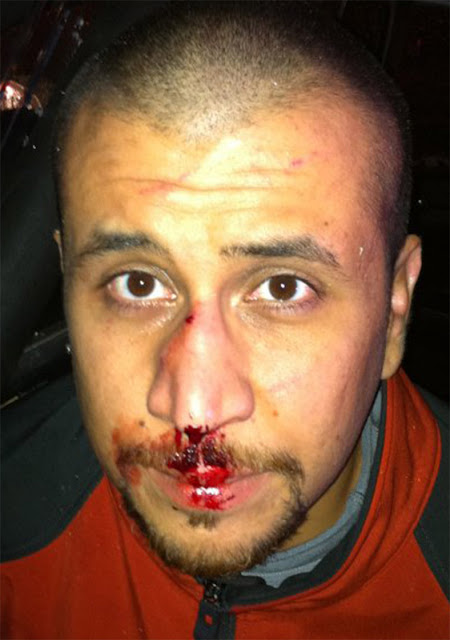